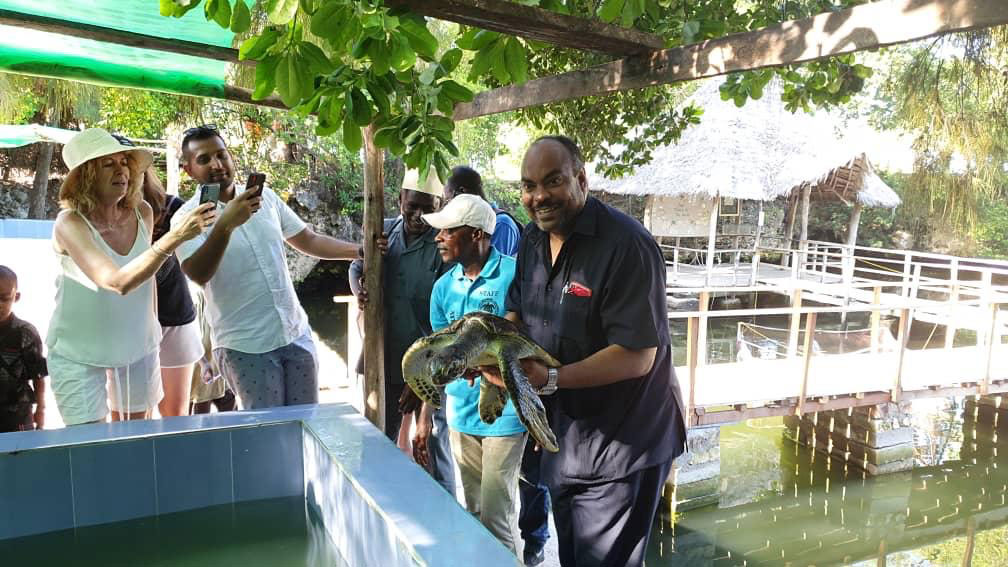 This year the program was opened by invited guest of honour Hon. Minister Mahmoud Thabit Kombo (Minister for Tourism, Information & Heritage) and followed by community entertainments groups including music dancing, acrobatic shows, traditional drumming to make the day fun. Finally the speech from the guest of honour, in which he insisted the importance of other villages of Zanzibar to conserve turtles for the benefits Tourism of Zanzibar. This year 100 turtles were released back into the ocean.

The volunteers and locals put tags on a number of turtles which are to be released. The boat leaves from Mnarani aquarium, which depends on the tides, where big turtles are released just outside the reef and the baby turtles released from Kendwa beach, then the boats return back to Mnarani Aquarium.

Mnarani, meaning 'place of the lighthouse' in Swahili, is located at the northern tip of Zanzibar Island in the small village of Nungwi near the lighthouse that marks this landmark. The pond is actually a large, natural tidal pool in the coral rock behind the beach. It was originally set up to rehabilitate and study marine turtles that had been caught in fishing nets, and the project developed to ensure that local baby turtles were also protected.

Elewana Kilindi Zanzibar is the ultimate romantic destination, the perfect place to enjoy the harmony of the ocean and spend time with the one you love. Set in a picturesque tropical garden with its secluded beachfront, the luxurious Pavilion suites embrace wide-arched glassless windows affording spectacular views over the Indian Ocean.

Each villa has its own private plunge pool and is tended to by its own Guest Ambassador. Kilindi's 'open-to-nature' approach provides the true essence to any stay and crafts a private, intimate and 'barefoot' appeal that so many crave. Explore the hidden secrets of the island or relax in the infinity pool watching the dhows head out to sea, with a gentle breeze in their sail.

There is a delightful spa offering an extensive array of treatments to satisfy you from head to toe, the spa combines African natural ingredients with both modern and traditional methods in the art of beauty, offering the ultimate in pampering.

Guests can enjoy day boat trips, scuba and snorkelling to get a glimpse of the dolphins, copious fish and vivid corals that thrive in Zanzibar’s waters. Stone Town is a UNESCO world heritage site, and a place where history still lives. The stone buildings, meandering alleyways, and markets still existing as they have done for centuries make for a fascinating day of exploring.