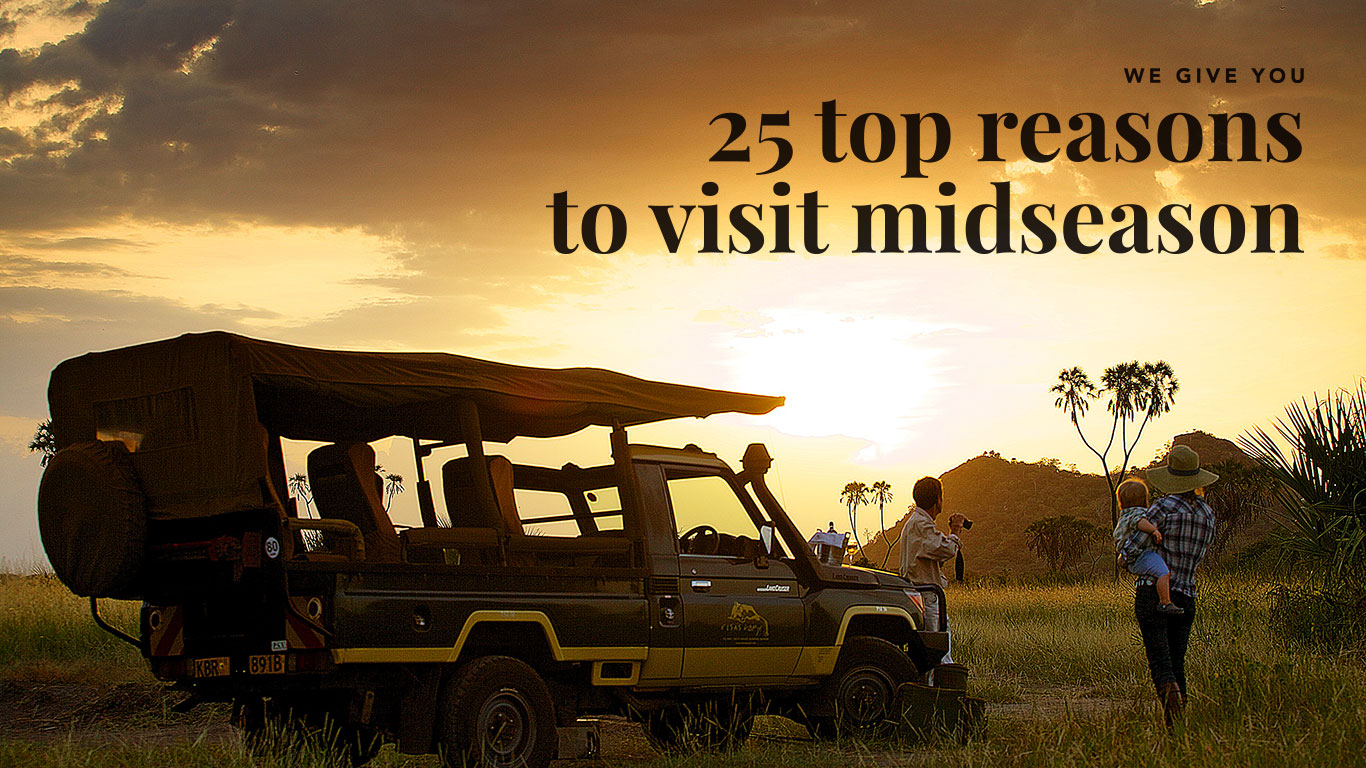 Traveling to East Africa during the months of April, May, October and November is ideal - the wild flowers are in full blossom attracting a kaleidoscope of butterflies that transform the landscape into a spectacular display of colour.  With the lush vegetation comes new life and many of the antelope take advantage of this to have their young. April, May and early June are ideal to witness a variety of change, including dramatic skies that make for incredible landscape photography.

There is such diversity across both Kenya and Tanzania, each area so different, from the semi-arid landscape of the northern properties in Meru, Loisaba and Lewa then the rolling savannahs of the Masai Mara and of course the endless plains of Amboseli with the dramatic backdrop of Mt. Kilimanjaro, each has its own unique charm that will leave you in awe of your surroundings. In Tanzania the dramatic highlands of Ngorongoro Crater to the vast expanse of the Serengeti plains and the undulating valley’s and swamps of Tarangire with the impressive baobab trees that dominate the landscape. In contrast the stunning coastline offers a different beauty with swaying palm trees, white sandy beaches and crystal blue waters of the Indian Ocean that mesmerise the senses. Choosing one’s composition is never easy as there is so much to capture and never enough time to get it all.

After the rainy season, from April onwards and then again in November, Meru enjoys spectacular displays of wild flowers that carpet the ground making for vivid shots of colour. This time also brings out an amazing array of butterfly species, some of which are particular to the arid northern regions. For photographers that love to capture wildlife, then there is no shortage of large and small game to focus your lens on. After the rains sees new life in Meru, Lewa and the Masai Mara and of course the Serengeti, if you are looking for cute shoots of new born that are trying to find their feet in this world and the shy little glances, as they inquisitively try and work out their new surroundings.  The beginning of the year is the wildebeest calving on the southern plains of the Serengeti, easily accessed from Elewana Serengeti Pioneer Camp. Elewana Serengeti Migration Camp has an influx of baby hyrax that scurry around the rocks, in search of hiding places.

East Africa offers dramatic landscapes and even an amateur photographer can’t go wrong. With views that go on for miles, magnificent backdrops that include Mt Kenya and Mt Kilimanjaro and the depth of the African sky makes for a stunning composition, whether it is an endless blue with wispy white clouds or a dark dramatic storm rolling in, every day can bring something different. The light makes the perfect shot, be it early morning before the first rays of light touch the grassy plains laden with dew and the skies are a pale turquoise transforming instantly as the sun rises, sweeping the landscape in warmth or the burnt red ambers of an African sunset that taint everything with its soft golden glow just before it disappears below the horizon.

There are 44 tribes in Kenya and more than 120 distinct ethnic groups and tribes in Tanzania, of which most recognised are the colourful Maasai with their elaborate beadwork and distinctive shukas. Photographers that are enamoured with traditions and cultures, should look no further than the variety of tribes that reside in East Africa, each unique and splendid in their own way. Cultural visits can be arranged. We would request that before photographing people, please seek permission or ask your guide to assist as some don’t like to be photographed. A small fee may be requested to do so.