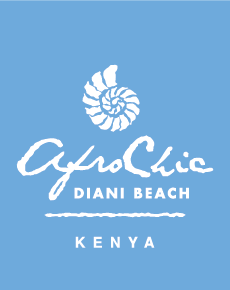 Diani Marine 5-star PADI Dive Centre has been providing first class diving excursions for more than 30 years. Their exemplary safety records are unique. They offer one boat trip per day (2 dives) and an additional one in the afternoon on request (min 12 divers). Diani Marine maintains 3 dive boats, two on duty and one constantly under renovation to ensure highest possible safety standards. Diani Marine also maintains a 3.6 meter deep pool for beginners and trainings.

An 18-hole championship golf course is located in approx. 3 minutes drive from AfroChic. It’s 85 bunkers, with its lush tropical vegetation, it’s large lake, several types of birds and monkeys  is regarded as one of the most attractive in East Africa, promising exciting games.

The 28 square km Kisite-Mpunguti Marine Park is reputed to be the most beautiful marine park after the Great Barrier Reef of Australia and is the best in Kenya in terms of species diversity, coral quality and reef build-up. The warm, pristine waters are host to dramatic coral formations, dolphins, turtles, sting rays, moray eels and a bewildering variety of sea life that comprise a unique eco-system that could be referred to as a garden under the sea. Run by Selina and Harm who are Marine Biologist and PADI Diving Instructors, who take limited numbers to offer you a more personal service.

During low tide there is the opportunity to explore the reef life of the Kenyan South Coast with a local fisherman or a “Beach Boy”. Get to know more about different species of Sea Urchins, Sea Spiders, Corals, Starfish and Stonefish. A very interesting tour starts right at the edge of AfroChic at the beach.

Mombasa is Kenya's second largest town and it is the only sizeable port. It has a recorded history stretching back nearly 2000 years, and was mentioned in the Periplus of the Erythraean Sea, a pilot's guide to the Indian Ocean written by one Diogenes, a Greek living in Egypt, around the end of the first century A.D.

The colonization of the coast by the Portuguese was a hit and miss affair with the invaders sometimes showing interest and sometimes the opposite. But it was also an era of strife between the Catholic Portuguese and the Muslim Arabs. The Arabs finally extinguished Portuguese hegemony with the capture of Fort Jesus in 1699 just over a hundred years after it was built. The next hundred years was a miserable record of petty wars between the minor sultans and of Omani Arabs based in Muscat. Trade, except in slave came to a halt until an army was sent, in 1822, by the Sultan of Oman to crush the warring states and re-establish commercial activity.

Some form of Arab government existed in what became known as the coastal strip until the region was declared a British sphere of influence following the treaty of Berlin in 1885. The town of Mombasa is built on a coral island. Less than a century ago, the builders of what was then called the Uganda railway attached the island to the mainland by a causeway. To the north a toll bridge spans Tudor Creek, with views of the old harbor, linking the town with the north coast beach resorts. On the south side a frequent car and passenger ferry service plies across Kilindini Creek, close to the entrance to the modern port area with its multitude of wharfs and deep water berths, carrying tourists to the splendid beaches of the south coast. Mombasa town itself is a mystical mixture of ancient and modern with a cosmopolitan population blending Africa, Arabia, Asia and Europe. The people who live in this old but vibrant gateway to Kenya and Africa now number almost 600,000. Fringing the dhow harbor is the old town, a maze of narrow streets and pedestrian lanes with quaint shuttered houses and open fronted shops; the smell of spices is always present. Dominating the entrance to the dhow harbor is Fort Jesus, which is open to visitors and which houses an interesting museum displaying antiquities from the length of the Kenya coast. Also on display are finds from the Portuguese warship the Santa Antonio D'Atanm which sank near the fort in 1697 while attempting to raise the Arab siege.

A wide array of African crafts and curios, together with some antiques, are available from shops and sidewalk vendors but a shopping highlight is a visit to Biashara Street where the shops compete for the purchaser's eye, and his pocket, with dazzling displays of locally woven fabrics and prints. Visitors find a visit to the Kamba carvers village near the airport a worthwhile experience. Scores of carvers can be seen at work, and one can follow the progress of a carving from log to the completed artistry. There is a shop selling the finished works.

Shimba Hills National Reserve thrust nearly 450 meters out of the coastal plain, an enchanting other world, lonely and remote from the heat below. The Hills are about 1 hour away and although not significantly higher than the coastal beaches, they are remarkably cool; breezes from the Indian Ocean rise over the eastern escarpment with invigorating freshness.

This pristine wonderland of Rolling Meadows and forests of giant primeval trees harbors a wide variety of wildlife, including some 500 elephant that favor the refreshing fruit of the Borassus palm. There are leopards often heard but not frequently seen.

But the most distinctive of the Shimba Hills National Reserve's many species is perhaps the rare and impressive Sable antelope, found in the same habitats as several large herds of buffalo. While never numerous in Kenya it is unlikely that viable populations exist other than in the Shimba Hills. Closely related to the Roan antelope, which it resembles, it is in fact, slightly smaller. Both sexes carry the 100-160 centimeter horns, which rise vertically before curving backward in a pronounced arc.

Picnic sites on either side of the escarpment provide entrancing views: to the east overlooking the distant turquoise of the Indian Ocean and to the west, on the right day, hazy vistas of the vast plains with the Taita Hills rising out of them like a misty giant and beyond them, on days of exceptional clarity, the mighty mass of Mount Kilimanjaro. Shimba Hills National Reserve also has a large number of insects that create also sorts of unique sounds once the sun goes down.

Unspoiled and one of the least exploited of all Kenya's game reserves, the combination of rolling grasslands and forest, of hill and valley and the shadowy animals and superb insect habitat make the Shimba Hills a delight for all nature lovers. Shimba Hills Lodge provides not only nighttime game viewing with an artificial moon but also escorted walks through a true fairyland.

The ecological attractions in Mwaluganje are diverse with scenic beauty such as the great natural forests, awe-inspiring cliffs and the warm blue Indian Ocean. Other natural attractions are "God's Bridge," "Time Rock" and the traditional shrine that characterizes the sacredness of the community.

Elephants are the main attraction at the sanctuary, and there are as many as 150 residing there. Mwaluganje is a historical bull area where independent elephant bulls grow in preparation for the demanding life of breeding males. Their families live in the neighboring Shimba Hills Reserve and Mwaluganje forest. On occasion, family groups visit males during the mating season, or cross the sanctuary as they travel between feeding areas. Once or twice a year, several related elephant families join up and travel as a unit of 200 females and calves (of all ages). They gather in the Shimba Hills and move into Mwaluganje during the rainy season (December, and March/April). Such large herds usually last for no longer than three to four days, and are consequently a rare and magnificent sight to see.

We provide an “AFYA” relax and wellness program consisting of specialized Massages, Manicure and Pedicure all tendered by a highly trained team.