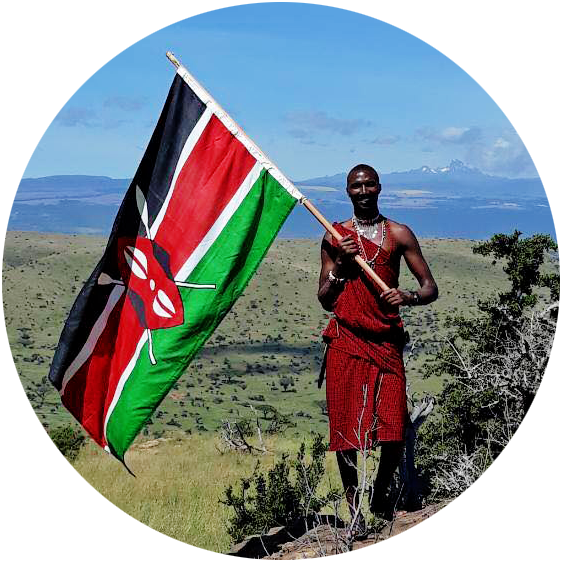 It is such a delight when you meet someone that is so passionate about what they do and is so full of life. The energy and enthusiasm that radiates from this young guide that works at Elewana Kifaru House in Lewa Borana Wildlife Conservancy is infectious. His knowledge of the bush and the animals that live in the conservancy is astounding and he is all too excited about sharing it all with our guests.

Full Name
Godfrey Kinyaga
Where were you brought up (where is home)?
Ngare Ndare Village, which is approximately an hour from Elewana Kifaru House by road.
Why did you become a Guide?
Because I am very passionate about the wildlife and wildlife management, education, conserving the environment that we live in and coexisting with the wildlife in our area
How long have your been a guide?
4 years
When did you know guiding was what you wanted to pursue?
I knew from a very young age this is what I wanted to do, growing up around the Lewa conservancy and the Ngare Ndare forest area and being so close to the nature and wildlife of this area
Where did you train / what guiding credentials do you have (KPSGA)?
I am bronze level and am currently taking exams for the silver level (Kenya Professional Safari Guide Association ‘KPSGA’). I trained locally in the Lewa Conservancy area and Utalii College where I studied tour guiding.
Where do you work and how long have you been working there?
I have been at Kifaru House Lewa Wildlife Conservancy for 7 years, starting off as a waiter. It is where I got my experience with guests, this fed my passion for guiding and sharing with guests my love for all our Kenyan wildlife
How long have you been a head guide?
3 years now
What does being a guide mean to you?
Being a teacher and being able to interpret nature to my guests.
What are you passionate about?
I am passionate about all things relating to nature and the environment, and being able to share this with guests.
What is the best thing about being a Guide?
The bush is my office! And I couldn't think of a better place to spend my working day
Which species in Kenya do you believe needs conservation the most?
Rhino, giraffe, gerenuk, cheetah and the grevy’s zebra. We’re lucky to share the Lewa conservancy with them all.
What do you love about Lewa?
I love the coexistence between the communities and the wildlife. The management of Lewa Conservancy is amazing and the dedication of all the rangers and staff involved in the protection of our wildlife
What are the problems you see within the current Lewa landscape?
Maybe loss of habitat is the only real threat but as above, the management of the conservancy and surrounding areas is so good, that things can only really get better here for the wildlife
How do you see Conservation and Tourism working together?
Tourism & Conservation is a natural relationship where both benefit each other with no real harm
What are three essential things a guide needs?
Personality!! Good people skills, good communication skills and passion
What would you like people to know that haven’t been to Kenya before?
It is a peaceful country with a diverse ecosystem, rich cultures, wildlife, beautiful scenery and warm welcoming citizens. We also enjoy some of the most perfect whether in the world year round. Warm during the day and cool at night, Lewa is the most marvelous place to enjoy and good night’s rest on the planet - at least so our guests tell me!

Guests can relax and feel at home, choosing how they spend their time, whether it is lying by the picturesque infinity pool gazing out over the plains or sitting in the library leisurely reading a book, time stands still at Elewana Kifaru House. Each of the five cottages offer spectacular views with well-appointed bedrooms, complete with opulent four poster beds and generous en-suite bathrooms.

The Lewa Wildlife Conservancy, based at the foothills of Mount Kenya, works as a model and catalyst for the conservation of wildlife and its habitat. We do this through the protection and management of species, the initiation and support of community conservation and development programmes, and the education of neighbouring areas in the value of wildlife.

For the last three decades, our practices have resulted in thriving black rhino habitat and population, which in turn has created a robust ecosystem for a multitude of species including the endangered Grevy’s zebra, elephant, lion, cheetah, giraffe and more. We envision a future where people across Kenya value, protect and benefit from wildlife. This future depends on communities being able to derive their day-to-day livelihoods in ways that are compatible with thriving wildlife habitat. As a result, we invest heavily in the livelihoods of our neighbours through programmes in education, healthcare, water, micro-enterprise, youth empowerment and more.As a catalyst and champion of this model that puts people at the centre of conservation, Lewa has influenced and supported the conservancy management for both private and community lands across northern Kenya.